Toronto has always been leading Canada’s dining trends and were one of the first to popularize the concept of micro-pubs and beer halls. One of the first to market is the popular Otto’s Bierhalle which opened in December, 2016. The Bierhalle is the second location for the Otto’s Toronto Restaurant Group and is located in the neighbourhood of West Queen West. Their first location, Otto’s Berlin Döner serves traditional German street food and opened 2 years ago in Toronto’s Kensington Market – it remains a hot spot for late night döners.

Otto’s Group of owners and operators are Nancy Chen, Matt Eckensweiler, Thomas Masmejean, and Konrad Droeske. These German-loving friends were known for throwing festivals and parties throughout Toronto prior to beginning their restaurant careers. They traveled to Berlin a couple times and fell in love with the city, culture and food. “That love is what fueled the German theme. We waited for someone to open a döner shop in Toronto and when that didn’t happen, we jumped on the opportunity to do it ourselves.” recalls Konrad.

A couple months after making the decision to open the Bierhalle, they renovated the location themselves and worked on perfecting their concept. Otto’s Bierhalle serves German-influenced food and beer. The draught selection includes 24 taps, half of which are German and European beers. The atmosphere is far from a traditional Bavarian-style setting and is much more modern, including: concrete walls, exposed brick, artwork, and lots of indoor plants to make the most of their inspiration from outdoor German beer gardens.

Otto’s Bierhalle has used 7shifts since they opened, however the same wasn’t the case in the early days of Otto’s Berlin Döner. Prior to 7shifts they used Excel, which was flexible, but proved difficult every time something was copied and pasted – formulas would break and it would need to be resent to staff. A lot of time went into double checking numbers and creating formulas. Konrad admits a lot of small scheduling issues would slip by with Excel and add up. This contributed to the 30-35% labor percentage they had prior to using 7shifts, depending on the day.

“Tracking requests was a lot more difficult without 7shifts. Staff would text, email, and call. It was always buried and I’d forget about it. It’s a lot easier with 7shifts.” says Konrad.

Their old scheduling process wasn’t working anymore and they realized they needed to make a change. They first tried a scheduling solution offered through their POS, but it didn’t provide the capabilities they were looking for. Their General Manager, having been in the industry for years, took it upon himself to search online and found 7shifts. 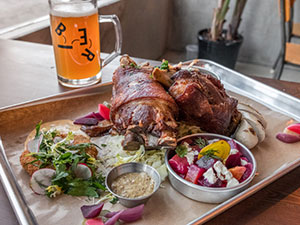 Once 7shifts was set up in Otto’s Berlin Döner, Konrad immediately started seeing the benefits. By using the weekly budget tool feature, he managed to bring his labor down to 25-30%, a 5% decrease in labor costs.

One of Konrad’s favourite things about 7shifts is the ability to replicate current schedules and easily make changes to them. He is a fan of being able to clearly compare the schedule to projected and actual sales. Using the 7shifts integrated time clocking app, 7punches, he was able to generate a variance report to compare scheduled vs. actual hours worked by staff.

“You always have a very good idea of where your labor costs are at – it’s a click away. It’s super helpful and really makes you strive for efficiency. I look at my bottom line constantly.”

7shifts has taken a lot of time off Konrad’s plate, and with that time he has been able to delegate the Belin Döner scheduling to his manager – which now takes just 20 minutes to complete. With the Bierhalle, Konrad still manages the schedule himself but it only takes him 1-2 hours per week to manage.

Otto’s employees enjoy 7shifts because of its transparency and this means increase trust between them and management. Employees always know how many hours they’ve worked and they’re on top of clocking in/out. This allows Konrad to keep track of employees, making it obvious on the schedule when they’re late. “I use the attendance report to track it and the evidence is right there,” says Konrad.

Communication has also improved within the Otto’s Group. Owners and management used to be contacted by email, text and phone calls from staff when they needed to swap a shift or provide their availability. Now, it’s all contained in 7shifts and Konrad can message groups of employees, such as Line Cooks or Managers.

“The biggest benefit to being a 7shifts client is definitely efficiency and simplicity. 7shifts has a simple vibe and easy functionality. People catch on quickly.” 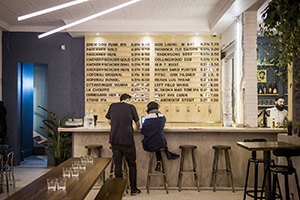 What’s down the road for Otto’s? Business has been better than expected and the owners have been working non-stop – it’s time to take a break. Konrad says, “As time goes on, we can open up a few more Otto’s locations. We’re keeping our options open at the moment – but maybe it’s time to take a long vacation.”

When asked about scheduling advice for his peers, Konrad says, “Put the work in at the beginning of your venture, enter all of your budgeting information, and you’ll get the real numbers when it comes to labor. Be efficient, identify problem days, and ask your staff for feedback on how to get labor costs down. That’s the only real advice there is – always work on improving your bottom line.”

PS. If you ever visit Otto’s Bierhalle, make sure you visit the restroom!

To see how much money you could save at your restaurant using 7shifts for staff scheduling and communications, try our restaurant labor cost calculator. 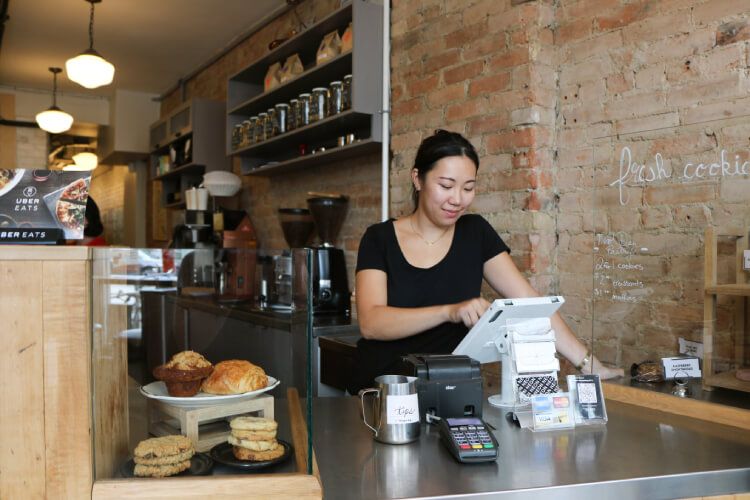 Ask any restaurant owner; staffing is a huge cause of aches, pains, and grey hair. Finding, evaluating, not to mention securing, talent is such a gruelling process. It’s no surprise that 30% 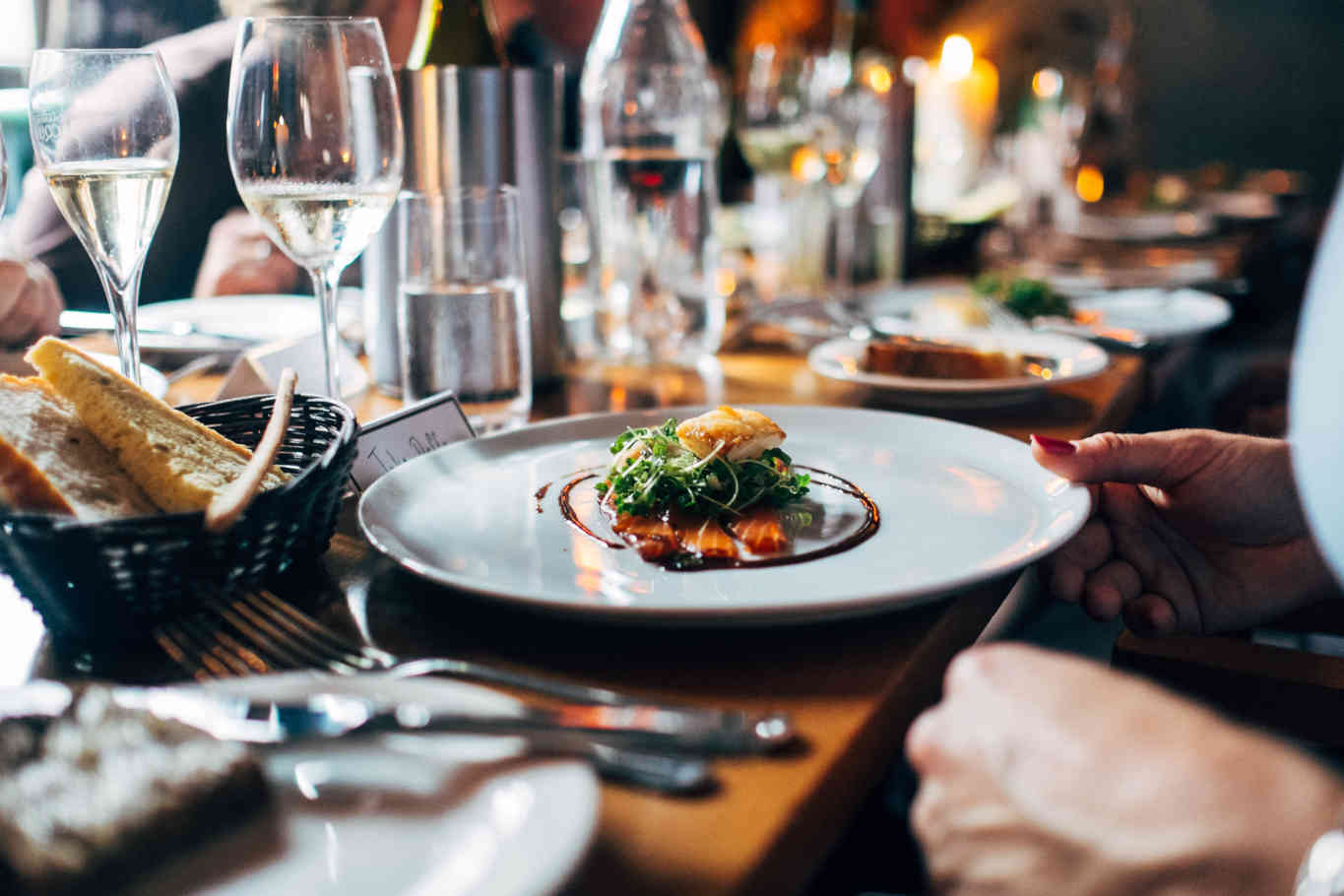 Sustainability isn’t new news, but recent findings have allowed this green movement to evolve and make room for amazing optimization.